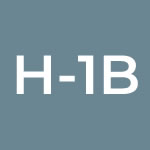 The H-1B visa is a non-immigrant visa that allows United States companies to employ foreign nationals in specialty occupations that require theoretical or technical expertise in specialized fields such as in IT, finance, accounting, architecture, engineering, mathematics, science, medicine, etc.

The definition of “specialty occupation” is one that requires:

Although there is no definitive list of occupations eligible for the H-1B visa, a useful general guide for applicants to check if their occupation might be considered a graduate specialty profession and thus might be eligible for an H-1B visa, is the Occupational Information Network website O*NET Online.

Certain family members may also accompany the H-1B visa holder as dependents. An H-1B visa holder may be accompanied or followed by spouses and unmarried children who are under 21 years of age. Spouses of H-1B visa holders cannot, generally, apply for work authorization.

H-1B visas are subject to an annual visa cap each financial year. United States employers can begin applying for the H-1B visa six months before the actual start date of the visa. The foreign national cannot start work until October 1 of said year.

The offered position must meet one of the following criteria to qualify as a specialty occupation:

For a foreign national to qualify to accept a job offer in a specialty occupation he/she must meet one of the following criteria: