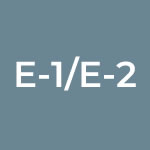 E-1 and E-2 Visas are available to foreign nationals of countries that have a treaty of commerce and navigation or a bilateral investment treaty with the United States providing for nonimmigrant entries.

The E-1 (“Treaty Trader”) Visa is specifically designed for foreign nationals business owners, managers, executives, supervisors and essential employees who are required to stay in the United States for prolonged periods of time to oversee or work for an enterprise that is engaged in trade between the United States and the treaty country which qualified the treaty trader for the E-1 designation.

The E-2 (“Treaty Investor”) Visa is specifically designed for foreign nationals business owners, manages, executives, supervisors and essential employees who are required to stay in the United States for prolonged periods of time to oversee or work for an enterprise that has received investment, or is in the process of receiving a substantial investment.

Specific criteria must be met to qualify for either visa.

E-1 and E-2 Visas are based on different treaties, however, and depending on which country the foreign national is from, he or she may not be eligible to apply for both visas.

For example, a foreign national from Spain would be eligible for both an E-1 and E-2 visa due to a free trade agreement between Spain and the United States. A foreign national from Tunisia, however, would only be eligible for an E-2 visa because the treaty that exists between the UNITED STATES and Tunisia is a BIT. Refer to the following website for a list of the specific countries that qualify for each visa: https://travel.state.gov/content/travel/en/us-visas/visa-information-resources/fees/treaty.html

Both E-1 and E-2 visa holders are initially allowed a maximum stay of two years after each entry into the United States. Requests for extension of stay can be filed and may be granted for periods of up to two years each. E-1 and E-2 visas are, however, issued based on visa reciprocity validity. Notably, there is no maximum limit to the number of extensions an E-1 or E-2 visa may be granted, as long as the foreign national maintains the intention to depart the UNITED STATES when his or her status expires or is terminated.

The three main requirements to apply for both E-1 and E-2 visas are: